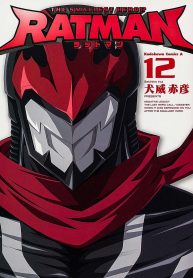 Meet Shooto. He’s a big hero fan and wants to become a hero!
The problem is that he’s mocked for being too short. One day, his classmate Mizushima
Invites him to become a “hero” at her home which is actually a criminal organization called Jackal.
Shooto then gets tricked by Jackal’s leader Crea to become their supervillian, Ratman!
Now the world’s smallest hero will embark on his battle against heroes and villains alike!

What do you Take me For?

King Of The Night