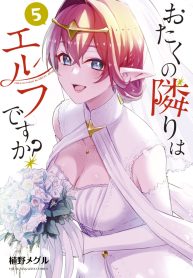 おたくの隣りはエルフですか? ; Otaku no Tonari wa Elf desu ka? ; Does an Elf Live Next Door to You?

Otaku no Tonari wa ERUFU Desuka? Manga also known as (AKA) “おたくの隣りはエルフですか? ; Otaku no Tonari wa Elf desu ka? ; Does an Elf Live Next Door to You?”. This OnGoing hiperdex was released on 2019. The story was written by Ueno Meguru and illustrations by Ueno Meguru. This Manga is about Adventure, Comedy, Ecchi, Fantasy, Harem, Isekai, Romance, School Life, Seinen, Slice of Life story.

In the year 20XX, Japan began exchanging ideas and cultures with other worlds. One day, a beautiful elf named Surt moves into the apartment next to Keita Inudou, a high school boy who aspires to be a mangaka. But she won’t be the only girl to push herself into Keita’s daily life! Will he be able to cope with all these sudden appearances while keeping his home, his career aspirations, and his sanity intact?

She is My Sister