Heroic Chronicles of the Three Continents 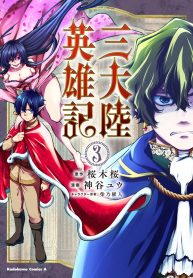 The 12-year-old boy entrusted his destiny to the dying nation!
Hercule is a boy who was raised as a successor to the declining Lemuria empire. Hercule has been crowned as the new Emperor of the empire, which is on the verge of being destroyed by the previous emperor, but in fact he has a secret that no one knows about…?
This is the story of a young emperor who becomes the savior of the Lemuria empire and the champion of the three continents!