Yaoyorozu Sex – My Virginity Was Taken by Japanese Gods 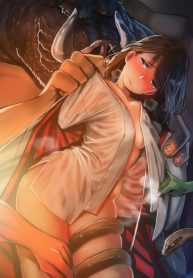 Yaoyorozu Sex – My Virginity Was Taken by Japanese Gods –  Summary

“If he keeps licking me like that, I’m gonna-…!” Strange-looking customers
bet on a figure being fiddled and played with on stage. The one on auction is my virginity…

My ID is Gangnam Beauty