The Great Mage Returns After 4000 Years 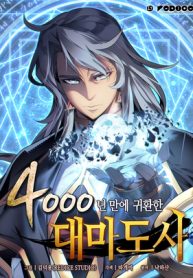 Lucas Traumen was the greatest archmage in history until he was condemned by Demigod to spend eternity losing his mind. But 4,000 years later, he’s thrust back into this world, into the body of Frei Blake, the weakest, most un-talented student at the prestigious Westroad Academy for mages. After all this time, the world of magic has barely progressed. Could this be the work of Demigod? Determined to find out, Lucas seeks to reach the highest levels of power once again and get his revenge.