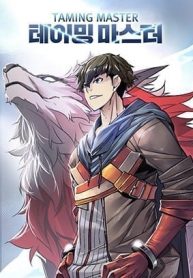 Taming Master Manhwa also known as (AKA) “테이밍 마스터 ; 驯兽大师 ; テイミングマスター”. This OnGoing hiperdex was released on 2020. The story was written by ARC Studio, Park Taesuk and illustrations by Bing Bing Go. This Manhwa is about Action, Adventure, Fantasy, Shounen Story.

The best-known VR game in the world, ‘Kailan’. A certified game addict knew in the virtual world, Ian. Despite having a Level 93 Archer character in the top leaderboards of Kaillan, Ian decides to delete it despite everyone around him telling him not to. All to convert to a hidden class he obtained by chance. The class he chose is the most worthless class in Kaillan, the Summoner class. If he wants to avoid getting an F in college, he needs to level up to his previous level within two months… Kailan is notorious for its very cruel leveling system, where it is said to take over a year to reach level 100. His struggles to reach level 93 in only two months unfold… Level quickly, thoroughly, and persistently. The legend of the ‘Taming Master’ begins!