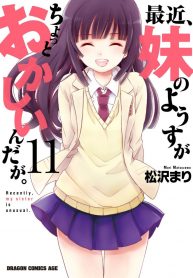 最近、妹のようすがちょっとおかしいんだが。, Recently, My Sister Is Unusual., Lately, My Little Sister Has Been a Bit Strange, ImoCho.

High school girl, Kanzaki Mitsuki, just got a new older brother when her mother remarries a fellow divorcée with a son.
Soon after, her new step dad gets transferred overseas and her mother follows him there,
leaving Mitsuki alone with her new step brother, Yuuya. Feeling abandoned by her mother, she stays distant from Yuuya,
never really getting along very well with him nor even keeping a conversation with him….
until one day—

Cheese In The Trap

My Memory of You