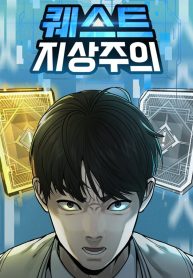 I Used to be a Boss Manhwa also known as (AKA) “퀘스트지상주의 ; 任務至上主義 ; クエスト至上主義 ; Quest Supremacism ; QUESTISM”. This OnGoing hiperdex was released on 2021. The story was written by Yu Nuni and illustrations by TAEWAN. This Manhwa is about Action, Comedy, Drama, Fantasy, School Life, Shounen story.

I Used to be a Boss – Summary

Gaming geek Suhyeon Kim hates school, and the dislike is mutual. Every day he faces
relentless bullying from his classmates, leading him to wish his life was more like the RPG quest games he plays. Suhyeon’s wish is granted when a quest prompt pops up in real life with an easy quest and an enticing reward. With nothing to lose he takes the chance, and one quest soon leads to another. As the stakes get higher and the rewards get bigger, Suhyeon soon finds he’s gone from being an ostracized nobody to the top of the school. Just how far will Suhyeon take his quests, and how far will he fall if he refuses to participate?

Bad Girls Turn Good When You Fondle Their Breasts